Posted on May 29, 2009 by Samantha from SocialMath

Whether you were sucked in by the story of Buffy, Edward, or Dracula everyone knows something about the lore of vampires.  Perhaps when you were young you wondered if they could be real.  Perhaps you didn’t.

Perhaps it wasn’t until your differential equations class when you professor talked about rabbits and foxes that you wondered about the stability of a vampire/ human interaction.  One of the fundamental questions about whether vampires exist is solving if vampires could exist.   Assuming vampires exist, then could there be a equilibrium where vampires and humans coexist?

Maybe it won’t come as such a surprise to you that people have written papers about this dilemma.   A good friend recently pointed me to a post which references this article and, of course, the original paper by Brian Thomas.  The most impressive part of the whole thing is that after all his calculations, he projects the equilibrium population of Sunnydale to be 36,346 humans and 18 vampire and the show labels the population of Sunnydale at 38,500.  (of course, Brian may have rigged this to work out…) There is not much else to say except to show you a glimpse of the paper to entice you to go read it for yourself. 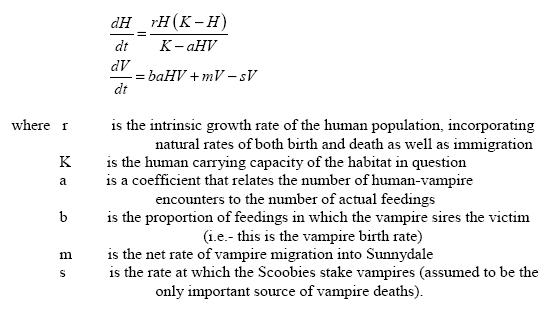 The most important thing that I have learned from this paper is that Stephenie Meyer’s vampires are less plausible.   That scenario must have a really small b factor to make up for the total lack of predators.  I mean, yes, the vampires in Twilight self-police, but despite my love of the Twilight Series, I think Sunnydale has a more believable scenario.

Regardless of which is more believable, I would have definitley paid more attention in my first differential equations course if they presented the population dynamics with something this extravagent.

Applied Mathematician and writer of socialmathematics.net.
View all posts by Samantha from SocialMath →
This entry was posted in Movies & Books. Bookmark the permalink.