Introduction to Thinking about Climate

Posted on January 15, 2010 by Samantha from SocialMath

I totally agree, popular culture is becoming inundated with the buzz words, “green”, “ecofriendly”, and “global warming”, but I’m not sure they are explaining things to you very well.  You have the some really good questions about what global warming means.  Even your pop idol, Miley Cyrus is singing, ““Everything I read is global warming, going green, I don’t know what all this means…”[1] And if she doesn’t get it, then why should the adults expect you to understand? The truth is, no one really knows all the answers about the problem. The climate is really complicated and scientists don’t always get things right the first try.  It takes them a little while to figure something out, just like it takes you a little while to learn something new. (Remember all those cooking failures when you were young?)  But we do know a LOT about climate change.  And we do know that something needs to change or we may be in some serious trouble.

Okay, let’s talk about scientist lingo. The scientists who wrote the IPCC (or Intergovernmental Panel on Climate Change) say, “A global assessment of data since 1970 has shown it is likely that anthropogenic warming has had a discernible influence on many physical and biological systems.” [2] What’d that mean? The report is saying that it’s likely that humans are affecting the world around us.  There is even a note that clarifies:  ‘Likely’ means 66-90%.  So we may -or may not- be affecting the global climate.  Well if that isn’t vague I don’t know what is!  But, maybe, just maybe, the statement has to be vague.  There were “more than 2500 scientific expert reviewers, more than 800 contributing authors, and more than 450 lead authors”[3] who worked on writing the IPCC report.  Okay, so you know how you and I can’t always agree?  We are only 2 people.  Now, imagine trying to get 800+ people to all agree on the same thing.  It would be impossible!  All of a sudden that range of 66-90% is looking a little more reasonable.  No matter what, all the scientists think it’s more than 50% likely that we, humans, are changing the climate.  We are affecting our planet. [Well there are some people who think climate change is not our fault- but  if someone can’t believe 800 of the top scientists who all agree, then do we really want to believe them? ]  The problem is actually that we don’t know what’s going to happen to it because of our influence.  This is what the scientists are currently arguing about.  What should we do?

Now, imagine you are making pancakes. (It sounds random: just trust with me for a minute okay?)  If you add too much

salt, then your pancakes start to taste funny. But a couple extra grains aren’t going to make a difference.  However, there is some critical mass of salt which ruins the pancakes.  And you can’t just take the salt out once it’s mixed up!  The pancakes are ruined and you have to start over.  This is what we are doing to our atmospher 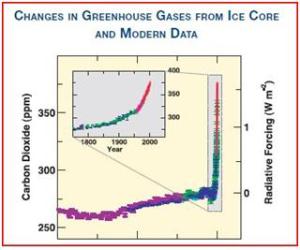 e.  Only, we are adding extra carbon and other GHGs (greenhouse gases) to the mix instead of salt.   Here, carbon is measured in parts per million or ppm instead of teaspoons.  Preindustrial levels of carbon were around 275 ppm.  That doesn’t seem like a lot, but you can trust me on this- global temperature is closely correlated to carbon levels.[4] The scientists from the IPCC think it’s “very likely” that GHGs like Carbon are the cause of global warming. [5] (very likely means 90-99%)  Check out this graph I’ve included.  We have now have 400 ppm instead of the recommended 275 ppm.  Our batter is getting pretty salty. (eww!)  Salty enough that the scientists are starting to wish we could throw it out and start over.  But we only have one planet and one atmosphere.  We can’t throw it out and start over.   How much more salt are we willing to dump in our mixing bowl and still eat the pancakes?

My research is about proving that we need to stop adding carbon to the atmosphere.  I want to find out if the batter really is too salty or not.  Can we pick out enough salt grains to make the batter eatable again?  I am studying something called the Keeling curve, which is the upward curve of measured carbon in the atmosphere.  The measurements are taken in Hawaii. (pretty cool right?) Well, scientists and mathematicians have actually figured out that we can determine where the carbon was released from despite the location of the measurements.[6] So we can conclusively know which area added the carbon to the atmosphere. The kicker is that most of the carbon is from industrialized nations like the U.S.A.  and China.  In 2000 we added more carbon to the atmosphere than every other country on earth.  Below, is a clever map of the world where each country is scaled based on that county’s carbon emissions.[7]

See how big the U.S.A. is?  So as Americans, it’s our responsibility to fix some of what we caused. Sadly, my research alone will not solve the problem of global warming.  But there are lots of real things that anyone can do to decrease the amount of salt they add to the batter.

The good news is, there are lots of easy ways that you can help.  The IPCC reports that lifestyle choices “can contribute to climate change mitigation across all sectors” by decreasing GHG emissions.[8] There are these two guys, Robert Socolow and Stephen Pacala who present 15 ways to reduce GHG, any 7 of which would hold the carbon emissions constant.[9] They are things like: decreasing the amount of energy you use in our home by 25% or using more wind power.  Stuff our society already knows how to use.  You might try to convince your school to put up solar panels or to use energy efficient air conditioners the next time they remodel.  You could also drive less…

Miley Cyrus really doesn’t need to be that confused about how to figure out climate change.  Mostly we need to “wake up America” and start passing laws and legislation to decrease the amount of green house gasses we are emitting and put money into developing new greener technology.  We are putting too much carbon in the atmosphere and the scientists aren’t sure what’s going to happen.  We don’t know how much carbon is too much and we don’t have a good way to pull it back out of the atmosphere.  (Remember the salty pancake analogy?) If you have any more questions, then please send them my way.  I included a bunch references in case you want to look those up for your school report.

Applied Mathematician and writer of socialmathematics.net.
View all posts by Samantha from SocialMath →
This entry was posted in EcoMathematics, Nature, Social Mathematicians. Bookmark the permalink.

7 Responses to Introduction to Thinking about Climate