Posted on January 29, 2010 by Samantha from SocialMath

I attended the JMM (Joint Mathematics Meetings) this January.  This is an excellent location for seeing one kind of

social mathematics at work.  If you know a mathematician, you’ll know there is a certain lack of social skills we employ in our everyday lives. It can make us socially awkward and a little anti-social.  Because although we apply total logic when it is unnecessary, we are not as endearing as Spock.  For you see, Spock has a fleet of very socially-able script writers who edit the world of the analytical thought just enough that the droves of social competent people can understand us.  So we had a fantastic spokesperson for logical thinking in Spock, but without a team of writers (or dedicated spouses) we flounder in social situations. Seeing one socially inept mathematician is cause enough for the normal people to talk, but what happens when you put several thousand of us in one large convention center?  What do the hotel clerks think of us?  The local restaurants?

What makes a convention of mathematicians stand out?  Well I guess some of us look homeless.  We have leather elbow pads and for the most part flat brown leather shoes- sometimes they are hiking shoes and sometimes loafers (mostly depending on the age of the wearer).    When we talk to someone we are more concerned with the second line of the name tag which says what school we are from then what the name says.  Actually, there is a stereotype that says we can’t even manage to look at each other’s nametags because we are all staring at our own feet. How do you identify an extroverted mathematician?  They look at the other person’s feet! 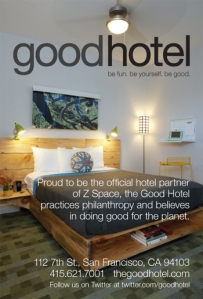 One of my cousins manages a hotel in San Francisco called The Good Hotel) which is an adorable boutique hotel in downtown.  With really cute room number signs as it turns out. She was telling me that different groups had their own group personalities.  I wonder if she has ever noticed the mathematicians.  Perhaps we are so ant-social that we pass right under the radar…

Apparently architects are really into going out drinking.  Mathematicians certainly don’t do that.  Not when there are free drinks at receptions every night.  The computer game developers are very into their gadgets; palm pres, ipods, etc.  Mathematicians don’t normally tote smart phones, but we’ll pull out our laptops and presenter remotes to give presentations.    But just between you and me, I don’t think we are very remarkable visually.  Some of us look like professors, some of us look like teachers, and others artistic students.   There is something subtle about identifying a mathematician.

It is socially more than visually, that the uninitiated can identify a mathematician.  We pause longer than necessary between responses.  We talk about the same topic for longer than anyone else would (we are just so excited to have found 1 topic to talk about that we really run it into the ground).  We spend longer worrying about the cost of a restaurant.  But, in the end, even though everyone at the table is participating in tip calculation and money division we are much faster when it comes to splitting the check.

But I think the best identifier is the little flash in our eyes when you tell us we can win a free puzzle in the exhibit hall by completing the puzzle in five minutes or less.  We are excited to talk about new ways to teach people Calculus and, above all we are excited to share our research with the only 10-30 people in the world who both care and understand it at the same time.  It is for those 10 people that we fly from all over the globe to share our mathematical stories.  It’s for the 3 questions after your 20 minute talk that you slaved for hours over your PowerPoint presentation.  The conference provides a sense of community.  Truly, the best way to indentify a mathematician is by noticing they are excited to be around other mathematicians.  Because, although we may look like Spock from the outside, we love to be included in an enthusiastic community just like everyone else.

Applied Mathematician and writer of socialmathematics.net.
View all posts by Samantha from SocialMath →
This entry was posted in Social Mathematicians. Bookmark the permalink.