Posted on April 16, 2014 by Samantha from SocialMath

Winter is coming… and going… and coming again here in Minneapolis, MN. I can’t believe this week has low temperatures below freezing. It’s April!

40% is a whole lot more than the 25% percent of the year that is supposed to be “Winter.”  But, what’s cool is that this is basically the Golden Ratio of warmth to cold!! Which makes Minneapolis, MN pretty cool (pun intended).

We had a lot of “below zero” days this year. Currently, below zero days are defined to be days where the low is below zero. These days really suck. They are the days when your snot freezes in your nose, when you need flannel lined jeans AND long underwear, when you overheat as you get dressed and then your sweat freezes to your forehead as soon as you get outside. Suffice to say, these days are less appealing than most to wait for the bus in the morning…

Here’s a graph of the daily highs and lows for the past winter. I have helpfully marked the zero Fahrenheit line on the graph. Because below freezing is bad, but below zero is worse. Perhaps I can provide a more emotionally accurate view:

I’m working on my infographic skills, so let use a cute snowflakes in a bar chart to count these crappy days! I’ll just consider the weeks when there were below zero days. So we are restricting our attention to the dates between December 6th, 2013 and March 6th, 2014.

That’s a lot of days! 50 days is 13% of the year. For comparison: only 3% of the year is federal holidays and your birthday is only 0.02% of a year. Here’s that percentage breakdown for you with a snowflake to represent the percentage of days which are below zero. I put my birthday on there too… it’s just so small you can’t see it.

Over the same interval (Dec 6 to March 6) there were only 14 days when the high was above freezing. This is why snow that lands in Minneapolis in November tends to still be hanging around in April. The weather is never warm enough to melt anything of consequence.

This winter has been long. For the last 40% of a year, it’s been cold. Today is still cold with lows below freezing. But not bitterly cold in a below zero kind of way. Is this normal? Well, 50 or 60 years ago, below zero days were much more common than they are now. This is because Minneapolis has been getting warmer over the decades. (Kind of like our planet!)

This winter could be a case of increased climate variability. Climate scientists have been talking for decades about increased variability in our climate due to global climate change. Global warming produces instability in the weather patterns. Thus, while the whole planet is warming on average, certain locations could be experiencing colder than average weather. There are plenty of predictions that these extreme weather events will become more common. So while I would like to end this article with the hope that next year will be better, it’s entirely possible that next year will be just as unpredictable as this one. I know it’s only April, but here in Minnesota I think we should assume that winter is always coming. 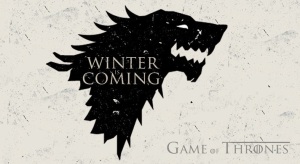 Applied Mathematician and writer of socialmathematics.net.
View all posts by Samantha from SocialMath →
This entry was posted in Communicating Math, EcoMathematics, Nature and tagged Below Zero, climate, Weather, Winter. Bookmark the permalink.