Posted on December 24, 2014 by Samantha from SocialMath

My dearest readers, I have just had an epiphany.  Not just your run-of-the mill epiphany. No, no, nothing like that.  I had one of those, now-my-life-makes-sense epiphanies. A moment when you are jointly reassured that you are doing what you are supposed to be doing in life and that all the steps you took to get there had to be just-so to reach this moment. I realized that the game I enjoyed playing in tap class when I was 16 is exactly the same as the game I played in my PhD Applied Mathematics research.

The person which brought about my life affirming connection is a Donald O’Connor. You may know Mr. O’Connor from Singing in the Rain.

Mr. O’Connor is the catalyst who first inspired me to be an entertainer/tap dancer. This inspiration lead me from my couch to the dance studio. And by my pre-teen years I was learning tap choreography from Fred Astaire, Ginger Rodgers, and, of course, Donald O’Connor (As well as several extraordinary RL teachers who include: Gayle Greenbrook and Greg Russell) . So it seems rather fitting that it would be Mr. O’Connor, dancing on two tables in an Italian restaurant, who brought it all together for me. 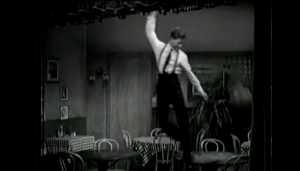 In this clip, Donald O’Connor utters the single best line I’ve ever heard. “Dancing is merely a question of applied mathematics.” Then, as the scene rolls along, it becomes clear that no one in the development process of this dance routine has much of an idea of why dancing is applied mathematics.  Instead they insert standard mathematical phrases throughout the routine: “Calculus” “Long Division” with no real connection to the math and the dance. Take a look at the clip below. Is starts so well! Then, as the dancing improves, the mathematical references regress. So disappointing! But, my dear readers, I will illuminate at least one real connection between mathematics and tap dancing. …Stay Tuned!

Applied Mathematician and writer of socialmathematics.net.
View all posts by Samantha from SocialMath →
This entry was posted in Art, Dancing and Performance, Quotations. Bookmark the permalink.