Recreational Math and Wooing Others

Posted on October 19, 2015 by Samantha from SocialMath

-Advice on how to woo a lady

This is a phrase that sticks out in my mind when I think about wooing another person. It was a piece of advice that was given to me some time ago. While, I don’t think that gifts is always the answer for gaining affection, I do think the general principles holds for falling in love with mathematics. Except for math it’s: 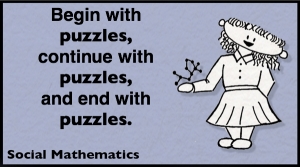 My love of mathematics began with a childhood full of puzzles like, “My dad ran a marathon and he won first place! He also got last place. How is this possible?”

Then my love grew when I got to undergraduate and I had a math professor, Jim Henle, who promoted the use of “Doodles” as a valuable and interesting thing to do in a “Math as Art” class. As it turns out, Jim has recently published a lovely book on how doing mathematics is similar to cooking; it’s titled, “The Proof and the Pudding.” I think this is especially relevant because both gifts and cooking are great ways to woo someone!

And while my love of mathematics has not ended, it has continued to continue with my professional research where I consider almost everything to be a “puzzle” or a “game.”  I am an avid board game and video game player. A while back, I even wrote an article about how awesome video game math is.

I love playing games with math. It’s exciting, interesting and challenging. So when I read this New York Times article, “The Importance of Recreational Math,” I thought, “Right on.” Manil Suri presents a fabulous take on why recreational math is so important.  “This is how math works, how recreational questions can quickly lead to research problems and striking, unexpected discoveries,” writes Suri.

A while later the man behind the desk realized the room was only $25 so he sent the bellboy to the 3 guys’ room with $5. On the way the bellboy couldn’t figure out how to split $5 evenly between 3 men, so he gave each man a $1 and kept the other $2 for himself.

MIT plays a trick on all the incoming freshmen. They line all the students up on one side of the gym and challenge them to run precisely half the length of the gym in 5 seconds. Then they must run precisely 1/2 of the remaining distance in the 5 seconds. All the students who make it to the other wall of the gym will get $1000.  As soon as the challenge is explained, all the mathematicians leave the gym without trying. Why?          <answer>

Applied Mathematician and writer of socialmathematics.net.
View all posts by Samantha from SocialMath →
This entry was posted in Games and tagged games, love, mathematical games, New York Times, NYT, puzzle. Bookmark the permalink.